In 1948 an order of priests called the Congregation of the Most Blessed Sacrament bought the Villa Massimo and grounds near Piazza Bologna for their international headquarters. The Catholic Diocese of Rome asked the priests to include a church building that would be open to the public for adoration of the Eucharist. At the same time an idea developed to also make this church the Canadian National Church, dedicated to the Canadian Martyrs, 17th century Jesuit missionaries who were killed by Mohawk Indians. 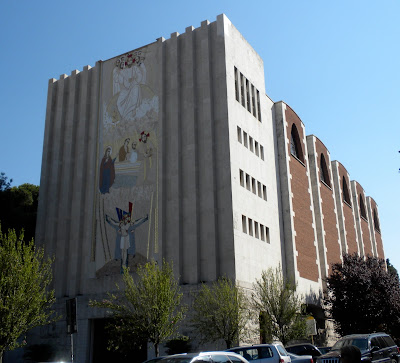 Nostra Signora del Santissimo Sacramento e Santi Martiri Canadesi was designed by Bruno Apolloni Ghetti and completed in 1955. The exterior of the church is an imposing rectangle, set half a block down a side artery from the main street in the neighborhood. 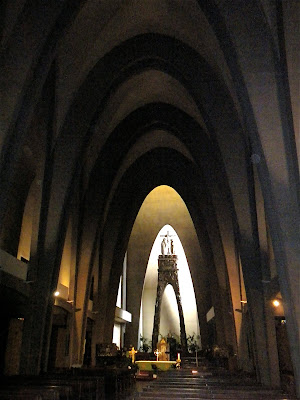 It is said that the architect had in mind the giant pines of Canada's forests. A series of tapering concrete arches form the nave and lead the eye to a towering canopy over the tabernacle against a wall flooded in natural night. 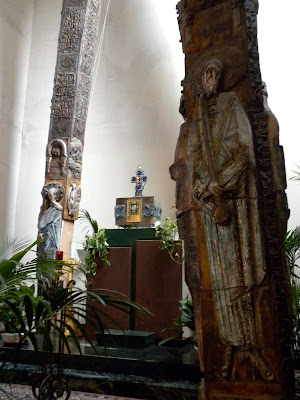 The canopy is decorated with reliefs in painted and glazed terracotta, designed by Angelo Biancini. 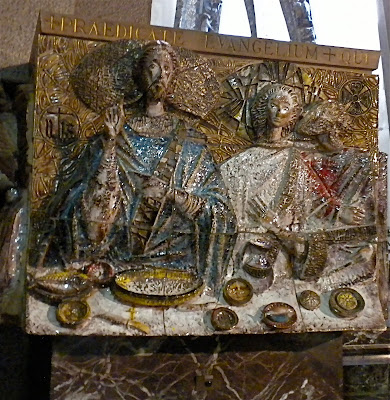 The pulpit has terracotta images of the Last Supper and the Madonna. 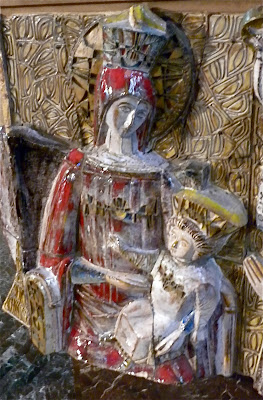 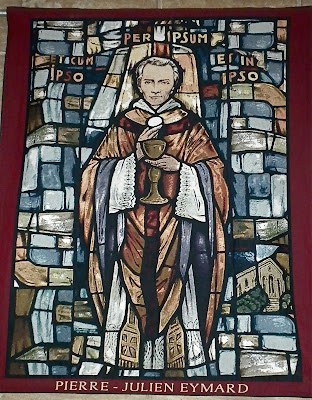 The Congregation of the Most Blessed Sacrament were founded in 1856 by Saint Pierre-Julien Eymard in France. Today, following in the footsteps of their Founder, their mission is to respond to the hungers of the human family with the riches of God's love manifested in the Eucharist. (Rule of Life n. 3) Today this church is open for adoration to all who want enter.

Question: Why is there a mosaic
of a raccoon on the facade of the church? 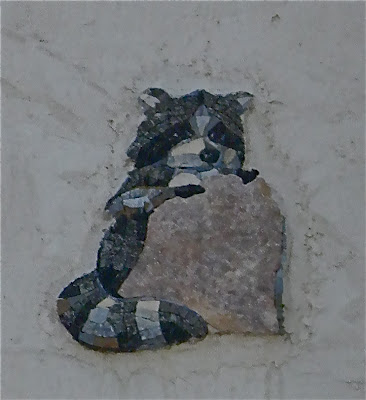 Thanks to John Thomas Lane, SSS, for encouraging me to visit this church of his order.
Posted by AMOROMA at 6:57 PM

Hi Larry! You find the most interesting places to visit! I have such good memories of Piazza Bologna e la scuola lingua but missed Nostra Signora and the raccoon. I wonder where the moose is hiding? Thank you for sharing your finds.

racoons are found in forests in Canada so why not.
The church was across the street from the Embassy of Canada who then moved in 2007 to its present location on Salaria. I do not know of many Canadians nowadays who are even aware of the existence of this church.

AMOROMA
Rome, Lazio, Italy
My journey began in San Clemente, California and continued in New York (actually Hoboken, NJ) until I came to Rome in the summer of 2007. This fascinating city is now my home.

These are people who are checking out this blog!